Honor Those Who Made the Ultimate Sacrifice On Memorial Day 2021 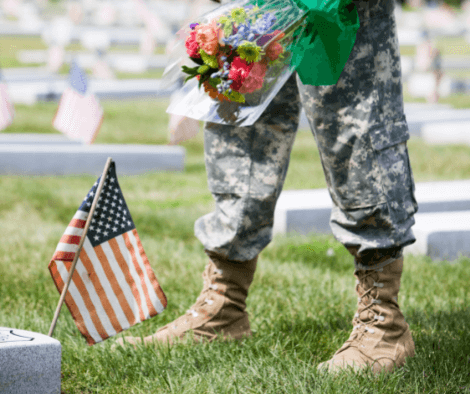 Memorial Day is a day to recognize Americans who died fighting for freedom. It’s a day of remembrance. A commemoration of the military men and women who didn’t make it home.

Americans celebrate Memorial Day in May with family and friends. It’s a beautiful time of year. A quiet time to shake off winter cold and enjoy the bloom of bright colored flowers. And it turns out that’s one of the reasons Memorial Day falls at this time of year.

Memorial Day got its start just after the Civil War. Communities throughout America informally held springtime tributes to fallen soldiers. They would spruce up their graves, decorate them with flowers, and say some prayers.

On May 5, 1868, the leader of a group of Northern Civil War veterans, General John A. Logan, called for an annual day of remembrance. One that would be celebrated nationwide.

Logan said, “The 30th of May, 1868, is designated for the purpose of strewing with flowers, or otherwise decorating the graves of comrades who died in defense of their country during the late rebellion, and whose bodies now lie in almost every city, village, and hamlet churchyard in the land.”

Appropriately enough, he chose May 30th for “Decoration Day” because it wasn’t the anniversary of any particular battle. One day of quiet during four years of war that had torn America apart. A spring day of repose with flowers in full bloom to recognize the ultimate sacrifice.

At first the day commemorated only Civil War soldiers. But after World War I, all fallen soldiers were included. In 1971 Memorial Day became an official federal holiday. Celebrated the last Monday in May, it honored the people who lost their lives serving in the U. S. Military.

Now we celebrate with barbeques, parades, and picnics that make for a wonderful long weekend.

And Memorial Day is very special to us here at Taps Our Duty. Our founder, Mark Williamson, served 23 years active duty. He saw firsthand the courage, selflessness, and sacrifices our soldiers make.

That’s why he felt a personal and solemn obligation to offer them the military wake they so rightly deserve. Taps Our Duty helps families honor their loved ones with the flags, seal, and memorabilia of their branch of service.

We hope all of you enjoy your time off with family and friends. But we also encourage you to remember, that’s not all there is to the day. Remember the fallen. Honor those who have made the ultimate sacrifice to make us the great nation we are today.