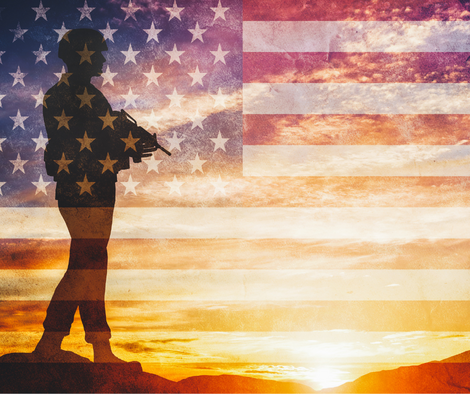 The way we celebrate the Fourth of July holiday isn’t new. Here’s what John Adams said in a letter he wrote to his wife from Philadelphia on July 2, 1776. The Continental Congress had just passed a resolution declaring independence from Great Britain.

He was ecstatic and said that independence should be, “…celebrated, by succeeding Generations, as the great anniversary Festival…with Pomp and Parade…Games, Sports, Guns, Bonfires and Illuminations from one End of this Continent to the other.”

At Taps Our Duty we agree!

Make no mistake about it. The birth of our great nation is worth celebrating! But we also like to remind people that we should also remember the service of our men and women in uniform.

Maybe we don’t so much on the Fourth because we honor those who died serving our country on Memorial Day. And on Veterans Day we recognize every American who wore the uniform.

But for Veterans, the great Fourth of July celebration is not only what John Adams wrote to his wife it should be. That’s, at least for Veterans we talk to, just part of the story.

To them, the words in the Declaration of Independence best convey the spirit of their service. The reason they were willing to put their lives on the line. And the foundation for their pride in having served.

For the Declaration of Independence is more than an announcement of America’s intent to separate from Great Britain. It also helped established American ideals. Ideals that our country doesn’t always live up to. But nonetheless, ones that Veterans…and all of us…aspire to.

Here’s what you’ll find in the Declaration of Independence:

You can view the original Declaration at the Rotunda of the National Archives Building in Washington, D.C. We recommend you see it for yourself if you get the chance. It is a moving experience!

But more importantly, we hope you’ll remember those who have served in the American armed forces. All of those who have worn the uniform from July 4, 1776 to those protecting our rights today. The men and women who serve in the Army, Navy, Marines, Air Force, and Coast Guard ready to fight for us. For our right to life, liberty, and the pursuit of happiness.

At Taps Our Duty we help families honor their deceased loved ones with the military wake they so rightly deserve. On this Fourth of July 2021, we hope you do as John Adams advised and celebrate with games, sports, pomp and parade.

But we encourage you to also recognize the military men and women who serve. Let’s remember the ones who help make American freedom possible. The ones who believe in…and fight for…the ideals so eloquently stated in the Declaration of Independence.

Honor Those Who Made the Ultimate Sacrifice On Memorial Day 2021